You may think it’s common knowledge that bullets are made of lead and copper. While this is true of most modern bullets, there is more to it than that. The materials contained in ammo depends on which manufacturer and country you purchase from. This is important because you may think you’re getting a good deal on steel bullets, only to discover they are banned at certain gun ranges and can cause several safety risks.

“A bullet typically contains only two types of metal: lead in its core, and copper in its jacket (or gilding metal, which is about 90 percent copper and 10 percent zinc).” Gilding metal is also known as brass, which is a mix of copper and zinc. An article on ammoforsale.com goes on to explain that some bullets are made of steel. These bullets are usually Russian made, like Wolf or Tula brand, and cost less than a typical bullet. They still have a lead core, but they have a bimetal jacket made of steel and a thin layer of copper on the outside. They’re nicknamed “magnetic bullets” because the steel jacket can attract magnets.

The problem with these “magnetic bullets” is they can pose certain safety hazards and some gun ranges don’t want to take that risk. When using these bullets, there is a higher chance of splash-back, creating sparks if the bullet hits a hard surface at a certain angle, and they can damage range equipment. Gun ranges also collect shells to sell and don’t want to have to sort through and remove the worthless steel. If you want to make sure you’re not purchasing magnetic bullets, do some research and stick with brands known to not produce magnetic bullets, like Winchester or Remington.

There are lead only bullets, and while they are cost effective, there is concern for lead toxicity. For this reason, they are banned in many indoor gun ranges. Bullets made of copper only are favored for their ability to remain intact upon impact, but they’re much more expensive. Plastic and rubber bullets are both used “as a non-lethal option for law-enforcement, including riot-control and suspect apprehension”. Some bullets are coated in nylon or synthetic polymers “to reduce barrel fouling and increase feeding consistency”.

As you can see, there is a lot more to what bullets are made of than just two common metals. Which type you purchase does matter and it’s important to be well informed when you’re shopping for ammo.

Could an Ammo-Up Machine be the Perfect Christmas Gift?

With Christmas only a few weeks away, you may find yourself scrambling for gift ideas. … END_OF_DOCUMENT_TOKEN_TO_BE_REPLACED 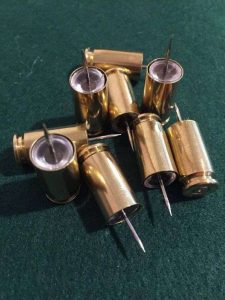 These days people come up with crafty ideas using almost anything.  If you’ve been utilizing… END_OF_DOCUMENT_TOKEN_TO_BE_REPLACED

In 1988, James Dudley invented the Bag-A-Nut machine.  This became a success within the farming… END_OF_DOCUMENT_TOKEN_TO_BE_REPLACED