A Brief History of Ammunition

In a recent blog we discussed what modern bullets are made of. It has taken a lot of trial and error to get firearms and ammo to be as effective as they are today. The way ammunition is made has evolved over time and it has a rich and interesting history.

David Lewis of Ammunition To Go shares what it was like from the beginning. “The first projectile humans used in hunting or warfare was almost certainly a rock of some sort. Then came spears, arrows, and other primitive forms of projectiles.” It wasn’t until the 13th century that the first forms of bullets were used. This is when it was discovered “explosive powder could be used to violently launch projectiles from a tube”. They weren’t very picky about what they used back then. Stones or metal objects were shoved into the barrel of primitive firearms and the first bullets were launched.

In the mid 16th century, the manufacturing of lead “balls” became popular and were used like a bullet. Lead was the most popular material for many different factors. “It was affordable, available, and easy to form. Lead or alloys provided enough weight to do damage while maintaining some semblance of speed.”

Beginning in the 1830s, the First Industrial Revolution birthed numerous advances in science and technology. This included advances in ammunition and firearms, and perhaps the most significant change was the adoption of “rifling“. This is the practice of creating a spiral pattern on the inside of gun barrels which makes them spin in the barrel before ejecting, causing a faster and more accurate shot.” This evolution allowed bullets to shift from a round sphere to the tube shape they hold today.” While this was a step forward, there was still a problem with using lead because of lead dust being left behind after firing.

By the 20th century, ammo makers began experimenting with different materials in an attempt to solve the problem of lead dust.  The outcome was “the development of the full metal jacket, a projectile with a lead core and a hard-metal (usually brass) shell.” Other materials used included copper, steel, rubber, and plastics in an attempt to make ammo more effective.

More recently, bullets can be made with all of the materials listed above, plus some zinc and nylon, depending on what brand you buy. Today, different bullets are used for different purposes. Law-enforcement officers use non-lethal rounds, while other bullets are made for hunting and self defense.

As you can see, the history of how ammunition was made is extensive and fascinating. Check out the sources below to learn more. 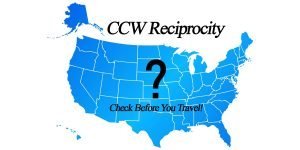 Why You Should Research Carry Laws When Traveling